Are Lagging Body Parts Holding You Back?

November 9, 2016 10:55 am
Why taking statins might be pointless – and even bad for you
Planet Fitness Violates Women’s Rights…and Worse!
Barbell Squats Build Muscle
Share on FacebookShare on TwitterShare on LinkedinShare on Pinterest Today we’ve got another great post from my good friend and personal coach, Ryan Faehnle. Ryan earned his Bachelor’s Degree in Exercise Science while serving in the U.S. Air Force. After college, he became an NCAA Division I strength and conditioning coach at Miami University, where he helped athletes from 20 different sports (from football to ice skating to power lifting) achieve their physical goals. His abilities were acknowledged from the highest level when famed Olympic strength coach Charles Poliquin welcomed Ryan to his staff.

Coach Ryan has lectured internationally on training athletes, fat loss, hypertrophy, nutrition, energy systems, and supplementation. Ryan has been running a private consulting business for 5 years and has coached both athletes and coaches in the professional ranks and the Olympic Games. I believe in Ryan so much that he’s been single-handedly designing my training and nutrition programs for the last two years!

Without further ado, allow me to hand the reigns over to Ryan.

Hey guys, Coach Ryan here to talk about strategies for activating weak or non-responding body parts—underdeveloped muscles that you’re unable to contract properly. These are things that I learned from world-class physical therapists and osteopaths while dealing with injuries I sustained as a result of non-responding body parts due to some congenital hip and shoulder joint deformities. While these injuries were definitely frustrating, I view setbacks as an opportunity to learn something new.

Whatever the cause of your weak or non-responding body part(s) (see my last post, Top 6 Body Part Specialization Mistakes, for a full list of causes), the strategies I’m about to share with you will allow you to re-educate your muscles to contract properly. Once you re-educate those non-responding body parts, you’ll no longer struggle to develop them and you can get back to “normal” training. That is, once you can contract your muscles properly, you can put these strategies on the shelf.

Weak body parts are often those with poor innervation—the nerve supply itself is inadequate and/or the signal from the brain to the muscles is weak. You can do all the extra sets you want, but until you improve innervation, your weak body parts will likely remain weak.

You must perform daily activation drills for these weak body parts. (This is not my idea—I got it from the best physical therapist I know.) First, put the weak muscle into its fully shortened position. Then, contract that muscle as hard as you possibly can for 10 seconds. Repeat for a total of 10 sets of 10-second isometric contractions. Do this every single day, preferably twice per day. These are limb-only drills—do not use any weight here. You need to learn how to contract without resistance before you learn to contract against resistance.

Once you can get a good limb-only contraction, the next step is learning how to contract in the shortened position (this requires a partner). Make sure you continue to do the limb-only drills as well. Using biceps as an example, we could use a preacher curl here. Curl the weight up, perform a 3-second isometric contraction, then have your partner apply a LIGHT force to push you through a full eccentric range of motion while you actively resist with PERFECT posture (i.e., everything else is locked down; the only movement occurs at the elbows).

Eccentric exercise recruits only about half of the motor units compared to concentric exercise, but it causes them to contract much harder. This will produce a bit of soreness which will help you “feel” the muscle working, even the next day. What’s a “light” weight? To give you an idea, if you typically use 100 lbs for 6 reps on preacher curls, start with about 30 lbs. Keep in mind, you must choose an exercise that allows for tension in the shortened position.

Taking the biceps as an example again, we could use incline dumbbell curls. Curl the weight up about 2 inches and contract as hard as possible for 6 seconds. Isometrics allow you to develop tension at a specific joint angle and there is carryover approximately 10 degrees in either direction from the angle at which you’re contracting. These stretched position isometrics will allow you to develop full control over the first 30 degrees of the movement. You should continue to apply strategies 1 and 2 as well.

Using a slow concentric tempo (the phase of the lift where the load is travelling away from the floor) allows you to develop tension through the full range of motion. Take approximately 5 seconds to go through the concentric phase and be prepared to cut your weight in half.

These should be done early in the training cycle as overall tension is relatively low—while slow concentrics are great for re-education, they won’t directly build muscle. Slow concentric movements also make a great post-surgery protocol to fill the gap between therapy and full programming. They allow you to train safely and minimize the risk of re-injury since the loads are significantly reduced.

Submaximal effort means you don’t train to failure or exhaustion. For example, using a weight that you could lift for 10 reps to failure and only doing 6 reps with it. This allows us to increase the volume of work we perform while utilizing perfect technique and practicing muscular contraction through a full range of motion.

-3 sets to failure with your 10 rep max: 10 reps on the first set, 7 on the second, and 5 on the third for a total of 22 reps
-8 sets of 6 with that same load gives us a total of 48 reps—more than DOUBLE the volume and with PERFECT execution

There is a time and a place for pushing your limits and going balls to the wall, but there is nothing wrong with spending a few weeks working sub-maximally for a given body part—especially when going to failure on your weak body parts almost ensures that you’ll end up using other muscles in addition to the target muscle.Ryan Faehnle-454-Edit

Sometimes a muscle doesn’t fire because of poor joint positioning. For example, when you lift your arm out to the side and then over your head, many people think it’s just scapular movement and humeral abduction, but there is actually a more subtle movement happening at the joint called “inferior glide” where the head of the humerus “glides” away from the acromion as you lift up.

Don’t feel bad if you’ve never heard of inferior glide—I’d never heard of it either until speaking with a physical therapist. Just using the shoulder as an example, if you are so bound up that you can’t inferior glide, your serratus anterior and rotator cuff will not activate as well. Low-load, long-duration stretches help with joint mobility because they not only impact the muscles, but they impact the joint capsule. These must be done for a minimum of 4 minutes (yep, they’re boring as heck).

These are pretty tough to describe, but a few examples are the sleeper stretch for your shoulders and banded shoulder and hip traction. Search for “Kelly Starrett” (physical therapist) on YouTube or look for his book, Becoming A Supple Leopard, to see this stuff in action. 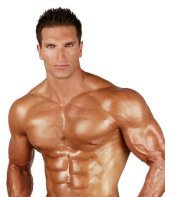 Vince DelMonte is the author of No Nonsense Muscle Building: Skinny Guy Secrets To Insane Muscle Gain foundat VinceDelMonteFitness.com
He specializes in teaching skinny guys how to build muscle and gain weight quickly without drugs, supplements and training less than before. A world famous fitness coach and author, Vince DelMonte is known as the top “Skinny Guy” expert and has helped more skinny guys and girls defeat their muscle unfriendly genes without drugs and supplements.Vince is a national competing fitness model champion, the most sought out fitness coach in his area, a regular contributor to Men’s Fitness magazine and the author of the world’s top muscle building course for hardgainers, No Nonsense Muscle Building.