April 5, 2011 5:19 am
Tart Cherry Powder: An Ergogenic Aid?
Chemical Warfare
Fitness Influencers Should Create Hope, Not Panic
Share on FacebookShare on TwitterShare on LinkedinShare on Pinterest

Get the absolute MOST out of your workouts! Maximum muscle stimulation is a generic phrase. It’s thrown around the gym between guys who have their PhD’s from Flex Magazine as they salivate over every new training article promising new gain. Maximum muscle stimulation. How do you achieve it? What is it? There are so many factors in achieving maximum muscle stimulation that it remains elusively undefined by most though parts of it are described everywhere training is written about. Hardly a soul ever goes beyond brushing up against one variable at a time, but collectively, all the factors that make up muscle stimulation will dictate where you fall on the spectrum between no results at all versus full genetic potential in your training and training goals. Explaining that sentence with an example, an article written on partial 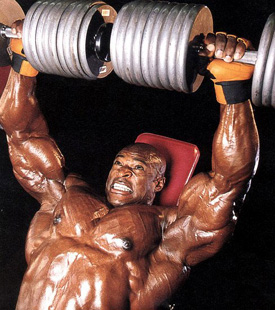 reps with massive weight only explores load volume as a variable and an uninformed reader might think this is the whole story and that partials are the only way to train. Gaining the most muscle or strength is very complex and there are many paths you can take, but there are five principles that have to be at the core of the training program for it to truly lift you to the highest level you’re capable of.

A simple working definition would be creating the most force in a muscle by recruiting the most muscle fibers either simultaneously or collectively in a set. The factors that dictate how this will happen are:

Describing these factors in detail will give you a much clearer picture of what it really means to reach your full muscle stimulation potential and thus achieve your training goals. Let’s build the foundation with positioning your body in a way that the target muscle can contract the hardest and move the most efficiently. Get a friend and clasp his hand like you’re shaking hands. Ask him to squeeze as hard as he can and in your mind gauge how hard he’s squeezing. Have him relax and bend his wrist backwards as far as it can (extension) and ask him to squeeze again. The arm is in the same position, the action is the same, the muscle used are the same, but he’s only about 50% as strong. Why? The wrist joint being extended fully stretches the wrist flexors to a weaker position anatomically and they can’t generate as much force. Every muscle has a defined close packed position that it can generate the most force from. It involves the amount of muscle tension provided by the joint position that the muscle is moving. Some muscles cross one joint, some cross two. If the muscle is stretched too far, as in our example, it can’t contract maximally. If it’s in too slack of a position, the same thing will happen. Have your friend fully flex his wrist and then squeeze your hand. It’s even weaker than in full extension. Each muscle has a main nerve connecting it to the spinal cord. This nerve branches out to reach bundles of muscle fibers and is responsible for contracting that bundle. The muscle spindle and golgi tendon organ in the muscle communicate proprioceptively with your central nervous system to decide how many motor units can and should be recruited to move a load. This is to protect you from over stretching or rupturing a muscle. In gym terms, if you’re not in the right position, you won’t be able to contract the most bundles to provide the deepest stimulus possible for growth and strength changes. Then, of course, with inefficient muscle fiber recruitment because of faulty position, you’ll end up cheating on your form or substituting with supportive muscle and now you’ve taken the stimulus off the target muscle. The results are poor results and eventual injury.

One example of close packed position is the chest press. Maximum chest contraction occurs with the arm forward flexed slightly and horizontally adducted as in almost the finished position of the cable cross over. That’s why this movement feels like you thoroughly work the muscle; you do! But, once again, the position is only one factor. Load is another. You can’t use enough weight to make this exercise the best exercise even though it puts you in the best position. EMG studies have found the decline press to be the best exercise at stimulating the most muscle fiber in your chest at one time. That’s because you achieve the close packed position close to peak contraction and you can use the greatest load. Bull’s-eye!! This is why certain exercises gain popularity as being the best for a particular body part.

Biomechanics are part of this factor as much as anatomical position. Once you know what exercise will have the potential to generate the most force, you have to know how to move and what to stabilize in order to create that force. Let’s look at a chest press again. Your shoulders have to be back against the bench, your chest elevated, and your low back arched so that your pec major is in the position to contract the hardest. As you lower the weight and then press up, you have to maintain your shoulder position or you’ll lose that contraction. Many people flatten their low back, depress their rib cage, and roll their shoulders forward as they press up. This renders the pec flaccid and the force is translated skeletally through the arms and into the shoulder and rotator cuff. The bottom line is that the pec contracts and then relaxes repeatedly during this motion rather than maintaining a contraction concentrically and eccentrically throughout so that you gradually recruit more and more muscle fiber.

The stabilization you provide to keep the target muscle in its best anatomical position will dictate the resistance path of the movement. The easiest example is the bicep curl. If you keep your elbows at or slightly behind your sides, curl smoothly to the top, maintain your elbow position, and then lower down to almost full extension, you’ve isolated the bicep and created peak torque at about 90 degrees of flexion. If you swing your back or shoulders, fail to squeeze at the top (resting instead,) swing your elbows backward instead of lowering slowly, and/or stop before full extension, you’ve done a horrible bicep curl. Any one of these mistakes takes the load off of the bicep and you’ll never achieve maximum fiber recruitment. There are times you want to do a modified cheat movement so that you can extend a set or create more load, but not if you can’t perform the movement correctly to begin with. In other words, with your heaviest set on curls, after a couple of strict reps you may chose to allow your elbows to come forward so that you get an extra two reps, but lower it down slowly to the correct return position so you maintain peak torque. There are always exceptions to the rule, but in terms of training, only if it’s safe and INCREASES the stress to the muscle, not DECREASES it because of such poor movement.

Load volume and rep scheme go hand in hand. One, of course, will always dictate the other. These five principles are so critical because they build on one another. Load volume and training design won’t do a thing for you if you can’t create and maintain each muscle’s close packed position to generate increasing stress with maximum torque. Once you’re comfortable with the movement patterns of the exercises, however, the resistance and protocol design will be the driving force behind your progress. Ancillary factors such as fast-twitch versus slow-twitch muscle fiber dominance between muscles, differences in individuals, nutrition, recovery, etc., provide some room for flexibility, but in a general sense, there are some hard rules for your training goals. A 2-4 rep max range will provide the greatest nervous system training. A 4-8 rep max range will provide the greatest potential for strength and power. And, finally, an 8-12 rep max range provides the greatest stimulus for muscle growth. There are so many good training methods and protocols that I refuse to even tell you that there is a best way to train. Every design is great for most people at some time if applied properly. This is why the cliche exists that tells us to switch our training around from time to time. Most people misinterpret this to mean do hamstring curls before squats instead of retooling the whole training style.

Pyramiding sets is the generic answer to get all the benefits of training. If you do eight sets of bench and fail one set in the 8-12 rep range, then another at the 4-8 range, then a final set failing at 2-4, then you would rightly assume you’re going to get some benefit from all three variables: nervous system, power/strength, and hypertrophy. But, have you ever trained for 6 weeks where you literally failed at 8-12 reps for 3-4 total working sets of the same exercise? I mean failed; not stopped because it was a little painful. Pick any rep scheme and ask the same question. When is the last time you chose a completely different training design to achieve one goal and attacked it for 6-8 weeks?

The intensity factor is integral to your training design. If you’re going for nervous system training, meaning you want to condition your nervous system to recruit as many motor units as possible all at one time for a heavy max lift (2-4 rep range), then you better be readily mentally to make it happen. If you really want maximum growth, then mentally you have to be ready to invite pain into your last couple reps instead of avoiding it by slouching on form or racking the weight. If position, movement, load, and rep range will get you 80% of the way to maximum muscle stimulation, then intensity will take you the rest of the way home!

Most people will have to back off for awhile and re-learn some lifting technique in order to take off in unprecedented gains. Some will have to do some extra reading to understand what training styles produce the best results for whatever goals they have individually. Everyone should try different training styles and protocols and document them thoroughly so progress can be measured objectively. In the end, you’ll understand training in ways you didn’t know existed and you’ll never stop improving!

Dr. Klemczewski received his Bachelor of Science degree in Physical Therapy from the Indiana University School of Medicine.While working as an orthopedic outpatient physical therapist, he continued his education by earning a Masters and Doctorate in health and nutrition related fields. Along the way, he also studied for and passed the renowned Certified Strength and Conditioning Specialist examination with the National Strength and Conditioning Association (NSCA).He finished a second doctoral dissertation investigating all contributing causes of childhood obesity and a corrective approach on his way to a PhD in Health Education. Athletics led Klemczewski to weight training by the age of thirteen and he competed in his first bodybuilding contest at the age of twenty. By the age of twenty-seven he won his pro card with the World Natural Bodybuilding Federation (WNBF) and has competed in pro bodybuilding?s largest venues including top-five finishes at the Mr. International and Mr. Universe contests. Shortly after finishing his first doctorate and winning his pro card, Dr. Joe created a wellness corporation and opened a fitness facility. He next founded Genetitec, Inc., a supplement company specializing in proprietary protein formulations. Dr. Joe can be contacted through his website: www.perfectpeaking.com