How Many Reps To Gain Muscle?

June 21, 2011 6:02 am
Is my diet strict enough to lose weight?
Tom Venuto’s 3.7% Body Fat Routine
The Low Carb Diet Cheat Sheet
Share on FacebookShare on TwitterShare on LinkedinShare on Pinterest

Question:
I have a question about the ideal rep range to gain muscle. I find the science behind all this to be fascinating, yet confusing. What actually happens within the muscle (metabolically and physically) in response to the various training protocols? i.e. Power: 3-5 sets of 1-2 reps at 80-90% of 1 RM, Strength: 2-6 sets, 6 reps at 85%RM, Hypertrophy: 3-6 sets, 6-12 reps at 67-85%RM. What causes muscles to get bigger and not necessarily stronger and what should I do if I want to gain the most muscle size possible? Thank you. 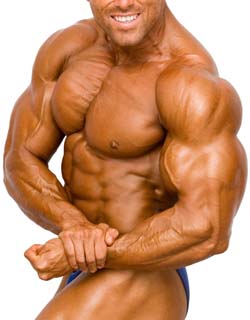 Answer:
The primary difference between the effects of rep ranges on the adaptive response depends on whether the load affects neural factors or metabolic factors. When you train with low reps (3 – 5), the adaptations that make you stronger are mostly neurological: You develop an increased ability to recruit more muscle fibers, you stimulate the higher threshold fibers that are not activated with high rep, low weight sets, you decrease neuromuscular inhibition, and there’s increased coordination between the muscle groups.

High vs Medium vs Low Reps

With low reps, the hypertrophy (size increase) of the muscle fibers is usually minimal. In other words, reps under 6 make you stronger, but they don’t necessarily make you bigger if the strength gains come from adaptations in the nervous system – the muscle fibers and other muscle cell structures do not hypertrophy (enlarge). This explains why certain athletes, powerlifters and Olympic lifters can be wicked strong but they sometimes don’t look as strong as they are.

When you train with medium reps (6-12) the adaptations are more metabolic and cellular and only moderately neurological. This is why 8-12 reps is the range most often recommended for bodybuilding and hypertrophy. You get bigger AND stronger in this rep range, but your strength gains are not maximal. This explains why some bodybuilders look stronger than they are (and why they are often the brunt of jokes made by powerlifters and weight lifters; i.e. “big, weak, slow, useless muscles”, ha ha ha).

When you train with higher reps (13-20+), the adaptations are mostly metabolic, cellular and vascular. This rep range produces local muscular endurance, a small degree of hypertrophy in certain cellular components such as the mitochondria and the capillaries, and very little strength.

There is not a distinct line where neural adaptations end and structural/metabolic adaptations begin; rather it is a continuum, like temperature or colors of a rainbow.

The advantage of the 8-12 rep range is that you get maximal hypertrophy (this is the best rep range for pure size increases when strength is not the number one concern). You will also get stronger, of course, but not nearly to the degree as you would training with lower reps.

Now, what exactly happens inside the muscle to make it get bigger?

Quite simply, ALL the structures inside the muscle cell grow when exposed to the appropriate training stimulus.

Remember back in high school when you had to memorize those diagrams of cellular anatomy (or you would get an F in the class)? There were all kinds of organelles and cell structures such as the endoplasmic reticulum, the mitochondria, the golgi complex, ribosomes, centrioles, Lysosomes, and cytoplasm. Remember all that stuff?

If you’re anything like me, you defied your biology teacher to explain the reason why you had to memorize all that crap and what good it would do you in the “real world.” Well, now that you’re in the “real world” and you want strength and muscles, here you go…

The mitochondria and sarcoplasm also take up a substantial amount of space in the muscle cell and they are best stimulated with high reps. High rep training can also stimulate increased capillarization in the muscle (just ask former Mr. Universe and Mr. Legs himself, Tom Platz, about the effectiveness of high rep leg training done in addition to the low and medium rep training).

In addition, there is more than one type of muscle fiber: you have slow twitch (type I) and fast twitch (type IIa and IIb). Slow twitch muscle fibers also hypertrophy from higher reps (although they have the least potential for size increases, which is why you should spend more time below 13 reps if it’s muscle mass you’re after… plus, myofibrillar hypertrophy is more solid, dense or dare I say, “real” than sarcoplasmic hypertrophy and pump).

So here are the take home lessons:

If you’re an athlete and your primary goal is strength and power for improved sports performance, then a good majority of your training is going to be in the 3-5 rep range (and occasionally some singles and doubles). This will help make you stronger, faster and more powerful without adding muscle bulk.

If you’re a bodybuilder or your primary goal is muscle mass, then the majority of your training should be done in the 6-12 rep range, but you should also do a little bit of training in the 3-5 rep range for power and strength, which will later facilitate hypertrophy (and prevent the powerlifters from making fun of you)

If you’re a bodybuilder or your primary goal is muscle mass you can also do a little bit of training in the 13-20+ rep range to facilitate the development of slow twitch muscle fiber, build mitochondrial density and increase capillarization (that will give you the “polished” and “pumped” bodybuilder look).

This is where programs like the Holy Grail Body Transformation system come into play:

The power of periodization and rep range variation

The Holy Grail training program, known as “The New Bodybuilding” or T.N.B. is based on using BOTH REP RANGES: The hypertrophy range and the strength range. You throw in occasional high rep sets as finishers for good measure. The result of this type of training style is MAXIMUM muscle size possible, and you still get stronger as well.

The rep ranges and training loads are alternated and cycled in a very precise fashion using a method known as periodization. Periodization is sometimes portrayed as very complex, but at the most basic level periodization is simply “planned variation” where you cycle your way through different rep ranges and progressively increase the loads over time, with periodic de-loads between cycles.

There are a LOT of programs out there that insist you should be training heavy all the time – in the 3-6 rep range or thereabouts. If bodybuilding or hypertrophy are your primary goals, I think that is a big mistake. It’s an invitation for injury and burnout to load that heavily all the time (without periodization), but even if you can handle it, it just doesn’t build the physique like some say it does… except maybe if you’re a mesomorph, fast-twitch freak-o-nature.

I am convinced beyond a shadow of a doubt that the most effective bodybuilding and muscle building programs in the world emphasize the 8-10 hypertrophy range, but they do not stay exclusively in any one rep range – they train in both the strength and hypertrophy range and they use periodization (planned variation of reps, loads, exercises) and diligent progressive overload.

Burn The Fat, Feed the Muscle is the most detailed, one-stop guide to fat burning nutrition you’ll ever find.That’s why so many people call it the fat loss bible.