One of the mantras I seem to recite daily to unsuspecting clients is the need to make sure they’re not just ready on time, but ready early. Being able to peak well for a contest is, first and foremost, overall condition and body composition. However, once you ARE in your best shape, you can improve your success by being in position to have options due to resuming a higher level of food intake. Unfortunately, many at that point are rushing to just be ready and even then may have misjudged by a couple of pounds. If there’s one common disappointment on contest day, it’s that after months of time and work, “I just didn’t quite look as lean as I thought I would at that weight.” 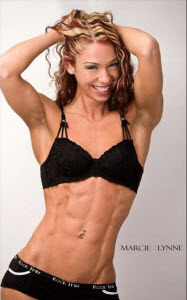 Being ready early is the obvious answer, but I’m sure I need to convince a few readers on this point. I recently read a comment by a competitor on my forum who said you don’t want to be too lean too soon…that peaking early isn’t a good thing. Peaking early is a great thing! The only time someone starts loosing muscle or looking stringy isn’t if they peaked early, but if they dieted incorrectly or don’t know how to make that transition. Also, if a competitor is competing too long – too many shows in a year – it can get harder to maintain size, but it can be done. The answer is to manage your diet well and that starts with day one.

If you want to lose body fat with good speed, it’s not rocket science to assume you need a high enough calorie deficit, but that creates a problem. The greater the deficit, the faster and sooner your metabolism shrinks. We want to lose at a strong pace, but we don’t want the ramifications of a crashing met rate. This need to be aggressive but have a way of controlling the process sets the table perfectly to sell you the same old ketogenic diet used by many. Eat no starchy carbs at all but every three days have one meal with carbs. Or maybe once a week binge on carbs for a day or even a weekend after going keto all week. This allows for the fastest fat loss possible but the carb breaks should keep the metabolism surging, right? Not on my watch. Let me explain.

Despite the fact that the carbs do what they can to rescue the metabolism from the trauma of the zero-carb diet, you would need the Jaws of Life to actually do it. Nothing strips muscle from you faster or depresses your metabolism further than ketogenic dieting. One of the greatest challenges of this tired, old diet is that not only does your met rate slow but you become so highly insulin sensitive that it you can end up storing much new fat at your carb-up periods. Studies show that the hormone responsible for converting glucose directly to fat can become many, many times more sensitive to carbs leaving you with up to 10 times the fat regain every time you consume more carbs than you can use at that meal! Complicating this is the peaking process when your body is still not able to assimilate carbs well and you can miss a chance to fill up well; but instead make it easier to spill over.

Carbs are not your enemy; as a matter of fact, they are both what stimulate your metabolism the most and spare muscle the best. The goal is to use the right amount to accomplish both. We’re back to the same conundrum. We need to limit carbs to get lean enough soon enough, but we need carbs to spare muscle and keep our metabolism high.

Decide first what level of carbs you would need for consistent fat loss. With some past experience, or just intuitively knowing if your metabolism is fast or slow, pick that happy medium where if you started at that carbohydrate and calorie level you know you would lose a pound or two per week. Now, don’t be in denial that as your body gets leaner and you get closer to that trip wire we call your metabolic set point, your metabolism will slow down. Your body is more efficient and leaner and you just don’t need as many calories – it’s normal. Keep in mind also that your body is designed to monitor fat levels in fat cells and when they get too low; your body will start conserving energy. We need to circumvent other mechanisms that can slow fat loss knowing that we all will deal with some of these natural slowdowns.figure model Marcie

Start early and start aggressively. First, let’s get cardio out of the way. I realize most people aren’t doing much during the off-season, so don’t go from zero to warp speed instantly. Build your intensity slowly, but start the pattern of using some baseline days where you keep steady-state levels strong. Add a couple of other sessions per week where you build up to interval levels, which in reality end up being mini-leg workouts forcing you not to do them more than once or twice per week. Both are important and starting them early will peel of more body fat, will allow slightly higher levels of food, and will build a stronger metabolism for the duration.

I’ll outline three possible carb rotation patterns that can help you get going. If I want to keep carbs steady I may choose that happy medium amount that allows for a strong pace, but will still include one higher-carb day to give a nice bump to glycogen levels and thus signal my endocrine system that I’m not starving. Good things happen to the metabolism when that is achieved, BUT if you go too far, you can actually store body fat and fill your glycogen levels so completely that it takes days to even start losing body fat again. Those that mistake carb increases for justified binges…bad idea. With a slower metabolism, I actually use this one-day method myself.

When someone has a faster metabolism and guarding muscle is even more important, it may take two increases per week to keep the pace in check. Still having two to three days of lower carbs/lower food is necessary to work through glycogen and into higher levels of body fat, but the additional carb-increase day can be a needed buffer. Keep in mind, however, that the goal is still to be losing so don’t let the higher days rise more than perhaps a doubling of carbs and sometimes not even that high.

For those who really struggle to lose – the unfortunate who got the short straw metabolically – all is not lost. It may take longer, especially at the end, so make sure you stay leaner all year and start sooner. Even so, you may need to drop carbs virtually into ketogenic levels, but not for the sustained typical time frames. You may need to eat zero starch one day, then up a little each day for three to four days, and then repeat. Your higher days rescue you and your metabolism, but digging deeper into the lower amounts is necessary. If you went too low and stayed there, you’re simply getting the worst of ketogenic dieting as described. The incremental, small upward movement is a good idea even in the most aggressive plans.

As I started this article, you want to plan the end of the off-season to have you at the right body composition and with enough time to take all guesswork out of the picture. Once you’ve missed being lean enough for a show or two, you’ll never forget how necessary it is to start early and plan for the normal metabolic slowdown at the end. Don’t drop carbs out completely – use them to keep your muscle and keep your metabolism – but know your body type and get a purposeful, determined start. Cycling carbs on one of these patterns can help you sustain a strong pace and keep your muscle. Winning isn’t just what happens on contest day; contests are won months before the national anthem is sung and the curtain goes up!