easy for those who are used to eating a lot of carbohydrates. You must strictly limit the amount of carbohydrates that you eat in order to get results. It’s not unusual for a low-carb dieter to be found gazing longingly at a piece of bread or cake!

But here comes nutrition and supplement science to the rescue in the form of non-impact carbs, net carbs and effective carbs with the promise of low-carb foods wrapped up in traditionally high-carb packages! It sounds like a dream come true to low-carb dieters who crave the taste of carb-containing foods but still want the results of a low-carb diet.

These terms are the latest buzz words in the weight loss industry but are people getting more than they bargained for with foods and supplements that are based on net, non-impact and effective carbs? Could these designer-foods be slowing or even stopping your progress on a low-carb diet?

Let’s start with a little Nutrition 101. A carbohydrate is a nutrient that is used by your body for energy. It contains 4 kilocalories of energy per gram (kilocalorie is the formal name for calorie).

Your body converts the carbs that you eat into glucose/blood sugar for use in a wide variety of metabolic processes. This conversion can happen rapidly or slowly depending on the type of carbohydrate food eaten. This rate is known as the Glycemic Index. A higher number means the food is rapidly converted into glucose – a lower number means the food is more slowly converted into glucose. For example, table sugar has a high glycemic index while beans have a low glycemic index.

Generally speaking, slower conversion of carbs into blood sugar is better. Here’s why…

The faster food is converted into blood sugar, the faster your blood sugar levels rise. When blood sugar levels are high, your body secretes insulin, its primary storage hormone. When insulin is present in the bloodstream, energy nutrients such as fat or carbohydrates are far more likely to be stored rather than burned. In terms of fat loss, this means fat is not readily mobilized from fat cells and fat burning slows or even stops.

By controlling insulin secretion, you can effectively improve your body’s ability to mobilize fat from fat cells. Once mobilized from the fat cells, they are more readily burned for energy, i.e. you lose fat. This is the basic premise that most low-carb diets are based on (there are exceptions, i.e. ketogenic diets, which I will get into later in the article).

For a more detailed look at the Glycemic Index, check out: http://www.glycemicindex.com

Examples of non-impact carbs that you’ll see in low-carb foods and supplements include fiber, sorbitol, maltitol, and glycerol. Fiber is completely indigestible by the body and passes through unused. Sorbitol, maltitol and glycerol are what are known as “sugar alcohols.” They are digested by the body but have little to no effect on blood sugar levels.

The Effective Carb is the opposite of the Non-Impact Carb. They are carbs that will have an effect on blood sugar levels. In most low-carb diets, the idea is to place a limit on Effective Carbs to keep blood sugar and, therefore, insulin levels under control. On a strict, low-carb diet, this number can be as low as 20 grams of effective carbs per day.

Effective Carbs can be divided into two basic groups: simple and complex carbs. Simple carbs are rapidly converted into glucose by the body while complex carbs (which, as the name implies, are more complex in structure) generally take longer to convert to glucose.

The Net Carb count is basically the same as the Effective Carb count. It’s the total number of carbs in the food minus the non-impact carbs. These terms can really be used interchangeably, which can be a source of confusion in consumers.

For example, if a food contains 30 grams of carbs and 10 of those carbs are fiber, the food contains 20 grams of net carbs. It’s basically what’s left over after you subtract everything else.

The term “Net Carb” was coined by supplement makers after glycerol (the non-impact sugar alcohol discussed above) was reclassified by the FDA as a carbohydrate. Previously, it had not been classified as either a carb or a fat and supplement makers were able to use it as a sweetener without adding to the carbohydrate count of a protein bar. When this reclassification took place, the carb counts of low-carb protein bars increased dramatically! The term “Net Carb” is a result of manufacturers wishing to keep their carb counts down while still using glycerol in the manufacturing process.

1. Non-impact carbs are very effective at reducing the insulin response you get from eating foods made with them. This means insulin levels will stay more even throughout the day, which will definitely improve the body’s ability to burn fat.

2. Non-impact carbs help low-carb dieters stick to their diets. There is no denying that sometimes you just want to eat a cookie. By eating a low-carb cookie, you get the enjoyment of the cookie while still keeping your insulin levels under control.

3. Low-carbs foods are actually being used by people who aren’t on strict low-carb diets but who just want to lower their carb intake. Non-impact carbs are very effective for this purpose.

1. While non-impact carbs don’t affect blood sugar levels, they still contain calories (except fiber, which is not digestible). A person who eats a lot of non-impact, carb-containing foods is still getting all the calories of an equivalent amount of regular carbohydrates! This fact is never highlighted in advertising for non-impact carb foods. Total caloric intake still matters on low-carb diets. If your body is getting too many calories, it won’t need to burn bodyfat.

2. If you eat large amounts (or in some people, even small amounts) of sugar alcohols, you could experience what could tactfully be called the “green apple quicksteps,” i.e. diarrhea. Sugar alchols are not normally found in large quantities in natural foods and the body can have a hard time digesting them. What the body has trouble digesting, it tends to get rid of as quickly as possible (if you’re familiar with the results of eating Olestra, the fake fat, you will understand what I’m talking about).

4. The FDA has not formally defined the terms “Low-Carb,” “Non-Impact Carbs” and “Net Carbs” as it has done with terms relating to fat content in food. That will surely come, but in the meantime many foods that are not particularly low-carb can get away with labeling themselves low-carb. As always, reading the nutritional information on the package and noting serving sizes is your best protection.

Is the recent flood of low-carb foods to the marketplace here to stay? Big food manufacturers are banking on it as evidenced by a recent Low-Carb Summit in Denver attended by many major companies such as Con-Agra and WalMart.In my opinion, however, the burning question when it comes to low-carb foods is: are we getting away from the real point of the low-carb diet? Processed foods are what got us into the obesity epidemic that we’re in today.

The answer lies in how you choose to approach your low-carb dieting. Foods that contain “non-impact carbs” can certainly be useful on an occasional basis but I don’t believe it’s wise to rely on them for a significant portion of your food intake. If you rely too much non-impact carb foods, you could easily find yourself not losing or even gaining weight on your diet!

Nick Nilsson is the author of numerous ebooks including:
“Muscle Explosion! 28 Days to Maximum Mass” 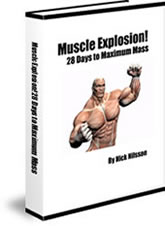 ORDER “Muscle Explosion! 28 Days to Maximum Mass” NOW
and experience how REBUILDING your physiology from the ground up
can pave the way for MASSIVE gains in strength and muscle FAST.

Nick Nilsson is Vice-President of the online personal training company BetterU, Inc. (http://www.fitstep.com).He has a degree in Physical Education and Psychology and has been inventing new training techniques for morethan 14 years. Nick is the author of a number of bodybuilding eBooks including “Metabolic Surge – Rapid Fat Loss”,“The Best Exercises You’ve Never Heard Of” and “Gluteus to the Maximus: Build a Bigger Butt NOW!”, all available atwww.fitness-ebooks.com.