A Sarcastic Look at Useless Supplements and Worthless Training Equipment

December 14, 2009 5:35 am
Ronnie Coleman Back in the Gym!! / Lee Priest Comeback? / Brad Castlebury Fight
Orals Steroids: How to Get the Best Results – Part 1
Titus Talks
Share on FacebookShare on TwitterShare on LinkedinShare on Pinterest

Infomercials, stupid ads, terrible products and useless supplements are here to stay. Just because they’re there doesn’t mean we have to buy them. But it does mean we can (and should) have a laugh at their expense…Please keep in mind, these are my own opinions, with which you might agree or disagree. I may change my mind about these things in the future but I will still be right.1. Cortisol-Reducing Fat Loss Supplements

Ads for cortisol-reducing pills are all over the place these days. Cortislim, Relacore, CortAid, Cortisyn, Cortless in Seattle, I Can’t Believe I’m Not Cortisolless, etc.

I have nothing but “respect” for a company that shamelessly shames people into buying their product by telling them they’re a “member of the unhappiest club on Earth – the overweight club.” I think it’s wonderful how the cure to stress-related fat gain can be found in a glorified Vitamin C pill. The people peddling this stuff like that need to be knocked on the head WITH an overweight club.

Relacore’s strategy? Herbal relaxants make you less reactive to stress so you don’t secrete as much cortisol and therefore lose weight. Great theory! At least unlike other substances that make you “herbally relaxed,” it doesn’t give you the munchies.

I don’t know about you, but I’m just plain sick and tired of products that say “Let’s treat the symptoms and not the root cause! That way, people will have to stay on this stuff forever or all the weight will come back on because NOTHING ELSE HAS CHANGED IN THEIR LIFE.” What a genius of a marketing technique. It’s like putting a band-aid over your nose when you have a head cold. Sure, it stops your nose from running, but when the band-aid comes off, you’re going to be up to your elbows in it.

This is a “fabulous” new ab exerciser that’s making the infomercial rounds. It claims to allow you to develop six-pack abs while lying in a reclined position. Just fold yourself up like a human omelette – it’s just that easy! It’s basically a Craftmatic adjustable bed without the mattress or the motor.

Unfortunately, the function of the rectus abdominus (the six-pack area of the abs) is spinal flexion (curling the spine forward) not hip flexion (bending at the waist like this machine forces you to do). Sit-ups work the abs isometrically (without movement) through hip flexion like this as well.

Don’t waste your money on this unless you want to have somebody you don’t like sit in it and be folded in half as a practical joke. They should have designed this thing with a clothes hanger built in to save everybody the time.

Here’s a newsflash – if you have to block your body from digesting something, maybe you shouldn’t have put it down your gullet in the first place. And besides, what do you think happens to undigested, unused stuff like that as it makes its way through your digestive system? Bingo. Your body puts it out the back door in a “green apple quickstep” hurry.

If the focus of your diet is on getting away with as much as possible, you’re simply not going to succeed in the long run. But on the bright side, at least you’ll be able to catch up on some reading by spending half your day in the bathroom.

You can’t see your abs unless you burn fat. You don’t burn fat by making muscles twitch for a few minutes. If you really want to lose weight using this thing, hook up the electrodes to a metal knife and fork and try and eat with them.

A topical fat-loss cream that actually worked would be a dream come true for so many people. Too bad they stink and I’m not just talking about the smell.

What would it take to convince me that one of these worked? Have a test subject use it on only HALF of their body. If they look like a stitched-together “before and after” picture, I’d believe something was happening there (heck, that’s a good enough idea that I might just try it on myself someday!).

You want a fat-loss cream that works? Smear some fresh Wasabe (Japanese hot sauce – kind of like biting down a hot chili pepper) on EVERYTHING you eat. I can guarantee you’ll lose fat because soon you’ll hardly be able to eat anything!

It’s always struck me as ironic that all the “massive weight gain” formulas show pictures of big, LEAN bodybuilders on the front. I guess the big, fat, bloated reality of it just wouldn’t sell. Do we really need 3000 calories in a serving of anything?

If a supplement comes in a 40 pound bag and, if it was taken according to directions, this bag would last you only 2 weeks, it’s no longer a supplement…it’s an alternative source of natural gas (if you or anyone you know has tried these supplements, you’ll know EXACTLY what I mean!).

A number of years ago, the “Weider” supplement company did a research study on its “Mega Mass” weight gainer and saw an impressive increase in bodyweight. What they didn’t include in their big glossy ads (for obvious reasons) was that people who took an equal number of calories in the form of TABLE SUGAR gained exactly the same amount of weight and muscle mass!

I’ll let you draw your own conclusions but at least Hardee’s restaurant, with their new 1500 calorie fat-burger bomb, isn’t trying to fool people into thinking it’s good for them. I can respect that honesty. If you bite into that hamburger thinking it’s going to do you any good in any way, shape or form, then push the meat back in as it slides out the back of the sandwich and go buy your cardiologist a nice Christmas present.

I want to shake the hand of whoever it was that first came to the realization that people will gladly pay FOUR TIMES AS MUCH for the exact same protein powder if you just add the water for them. He or she is a marketing genius.

“Proprietary” can be a very “clean” way of saying “we don’t want to tell you how LITTLE there is of anything useful in this product so we’ll call it a ‘secret’ and not tell you.”

Granted not all proprietary formulas are like this – some are legitimate and useful. But if a product comes in a small 1000 mg capsule, and has 18 ingredients in it, I suggest you find out the effective doses of each of those ingredients. They may be included and listed just to make the product look good.

For example, Phosphatidylserine is an excellent (and scientifically-proven) cortisol-reducing supplement. It’s included in many cortisol-blocking formulas. But consider this: an effective dose is 800 mg. If you can explain how they can possibly fit an 800 mg dose in a 1000 mg pill that has 17 other ingredients in it, I want you doing my taxes next year. On second thought, maybe not…

9. The Majority of Informercially-Sold Exercise Equipment

Normally, I don’t like to make blanket statements about entire classes of exercise equipment but then again, sometimes I do. Bottom line, much of the stuff sold on TV and infomercials is just simply plastic-and-elastic junk pedalled to desperate people looking for a quick fix.

I’m sure this does not really come as a terribly mind-blowing, earth-shattering shock to you.

Until I watched these commercials a few times, I really never realized how much of an awful hardship it was to lie down on the floor and do a regular crunch. What a fool I was. Wouldn’t our hunting and gathering ancestors be proud.

And judging by the demonstrators on TV, some people can’t apparently even do a crunch without wrenching on their neck like they’re trying to pull their head out of something (or someplace – I’ll let you figure out where that might be).

The world will never be without terrible supplements or lousy exercise equipment. As long as there’s a buck to be made off of people’s laziness and insecurity, those things will exist. Your best defense is knowledge, a willingness to do what’s necessary, and a good sense of humor when these things get just too stupid to believe!

This exercise can also be used as a burnout/finisher from the Incline Face Away Pushdown. Once you’ve done as many reps as you can on the pushdown, just finish up doing as many presses as you can. Your triceps will be completely burnt out by the end of that set! 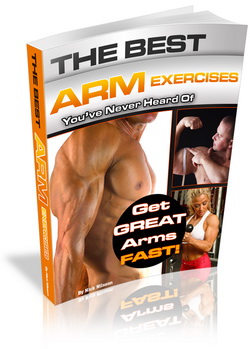 “The Best Arm Exercises You’ve Never Heard Of” is a book about unique and innovative exercises devoted entirely to the arms…biceps, triceps and forearms. It contains information on 68 extraordinary new exercises and includes access to an online exercise database where customers can view videos of almost all the exercises being performed.You can read more about this book and view the sales process by clicking here.

Nick Nilsson is Vice-President of the online personal training company BetterU, Inc. (http://www.fitstep.com).He has a degree in Physical Education and Psychology and has been inventing new training techniques for morethan 14 years. Nick is the author of a number of bodybuilding eBooks including “Metabolic Surge – Rapid Fat Loss”,“The Best Exercises You’ve Never Heard Of” and “Gluteus to the Maximus: Build a Bigger Butt NOW!”, all available atwww.fitness-ebooks.com.