Many people have already heard that the worldâ€™s largest bodybuilding company, bodybuilding.com, sold a huge controlling stake to Liberty Media, parent of QVC, for $100 million dollars. However, what some people donâ€™t know is that there are those who are panicking for various reasons and some even believe that the sale could cause the sport of bodybuilding to die off!

Find me a person with a TV and Iâ€™ll find you someone whoâ€™s seen countless commercials for those ridiculous work-at-home guides and plans that promise youâ€™ll be making hundreds of thousands of dollars in no time, all from the comfort of your own home. And thereâ€™s a good reason why so many of these â€œfabulousâ€ work-at-home products exist. Itâ€™s because people are dreamers.

They dream of waking up at their own leisure, working from their home desk, taking brakes whenever they please, and ending their workday when they see fit. In these visions money comes easy, vacations are frequent, and life is easy. But in the end, these cheesy plans and guides are nothing more than an illusion standing in the way of hard work and the people who buy them are still, wellâ€¦ dreamers.

However, one man whoâ€™s not a dreamer is bodybuilding.com CEO Ryan DeLuca. The 30 year-old head man of the largest bodybuilding site in the world made himself who he is now from the ground up. Starting in a two-car garage just eight years ago, DeLuca began selling supplements until he could afford a real warehouse to store his stuff in. Today, he heads a multi-million dollar company that looks to top the 100 million dollar mark in sales this year. There were no get rich quick schemes here, just pure, hard work.

But Ryan DeLuca has been getting rich quickly as of late. Especially after the Liberty Media Corporation purchased a controlling stake in bodybuilding.com for 100 million dollars on January 7th from the DeLuca family. As the most visited bodybuilding and fitness site in the world with over 100,000 unique visitors every day, the chance to purchase a big majority of bodybuilding.com was irresistible to Liberty Media who already owns QVC, expedia.com, backcountry.com, and the Atlanta Braves.

The deal was well received by both parties as Liberty Media Senior Vice President Michael Zeisser said, â€œWe are pleased to welcome entrepreneurs of the caliber of Ryan DeLuca and his team into the Liberty family. We look forward to driving collaboration among Bodybuilding.com and Liberty’s existing e-commerce and television companies.â€ DeLuca, whose family still owns a minority stake in the company, returned the favor by saying, â€œWe are thrilled to join the Liberty Media family and to partner with their other top-notch commerce companies.â€

From the looks of things, one would think that this is simply an amazing story of perseverance and determination ending with a person finally getting their well-deserved due. But, as with any great story, it is not without controversy.

And much of the controversy stems from speculation and rumors that have arisen ever since bodybuilding.com sold a big stake to Liberty Media. Strewn across Internet sites and forum boards are claims that bodybuilding.com must remove anything even remotely controversial from their site as part of the deal. That means anything to do with steroids and other hardcore bodybuilding topics must be axed in order to suit Liberty Media.

To put this into a better perspective, I spoke with a longtime forum member of bodybuilding.com named Matt Hawryliw about some of his thoughts on what many people have been hearing with regards to changes on the site.

When asked of any changes he had noticed on the site, Hawryliw said, â€œThe biggest change I have seen was the steroid section being moved to the IFBB section. They claim it was to help to keep “noobs” (beginning users) from asking stupid questions. We all know the real reason was to take the steroid section off the front page to avoid any negative light. Ironically, steroids were prohibited from being talked about in the IFBB section before. Now, steroids are a sub-section.â€

If the rumors of bodybuilding.com removing controversial material is true, he also said it would affect him heavily stating, â€œI enjoy increasing my knowledge on all types of issues, steroids included. And if they take that away then I may want to leave. If censorship takes over then without a doubt I will have to find a new board.â€

Besides the displeasure by certain members of some hardcore content being moved around on the site, many bodybuilding proponents have worried that the actual sport of bodybuilding could take a huge hit as well in the aftermath of the sale. It has been well publicized in the past that Ryan DeLuca and his company have been instrumental in helping bodybuildingâ€™s growth through the financial sponsorships of many amateur and professional contests.

Now some fear a more commercialized entity like Liberty Media taking over such a large chunk of the company will mean a decrease, or even total cease, in the amount of contests put on by the site. That could be detrimental to a sport that has been trying to make a comeback after falling so far from its glory days of the 60â€™s and 70â€™s. 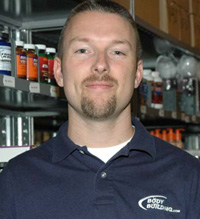 I knew that there was only one way to dispel all of this gossip and rumoring and ask the man himself, Ryan DeLuca. After communicating with him, I was absolutely shocked to find out that so much of what had been said by various other sources was complete garbage.

As far as bodybuilding.com continuing to put on contests, fans and participants of the sport can rest easy as Ryan exclaimed, â€œYes, we are going to continue doing this for sure. No changes in our overall strategy are planned. This decision is aided by that fact that nothing will change with regards to the way the company is run.â€

DeLuca made this clear in stating, â€œWe are still 100% in charge of the business and strategy. They are allowing us to continue our current strategy and they are not asking for any type of changes. I am still the CEO, no new people are being added to the company by Liberty, and nobody is leaving. Things will stay the same!â€

And he told me what is really going on with the issue of controversial material being moved or removed due to the Liberty Media deal mentioning, â€œThis is not true. They have not asked us to remove anything or change anything on our site. Of course, with more national media watching what we are doing than ever before, we have to be extra careful with what we do or say so we don’t end up on Dateline.â€

There certainly is more national attention being focused on bodybuilding.com than there ever was in the past and that should only increase in the coming years. Sales are projected to keep going up with estimations of 116 million in 2008 and with Liberty Media having stocks in so many mainstream companies; bodybuilding.com should see more and more average gym visitors checking out their site.

Not bad for an eight year-old operation that began with most of its merchandise being stored on top of jet skis in a garage. And there are lots of people who couldnâ€™t be happier for Ryan DeLuca and his company including the forum member I talked to, Matt Hawryliw, who said, â€œI want to say congratulations to Ryan Deluca for getting what he deserves after all his hard work. Ryan Deluca is a good guy and truly has put his heart and soul into this company.â€

DeLucaâ€™s hard work doesnâ€™t look to be stopping any time soon though as heâ€™s still in charge of a vast, growing company. And as bodybuildng.com continues to further grow, letâ€™s all hope that the sport of bodybuilding continues to grow along with it.